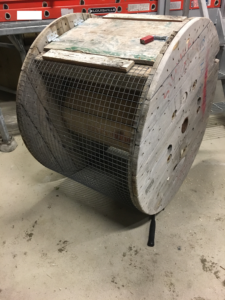 materials to do so as it involves a very large wooden spool. This rolling hay feeder is built using a very large spool and wire mesh to create a device that you can fill with hay which the animal has to roll around in order to get at the hay inside. Hay can be easily added to the device through a trap door in the top. This rolling hay feeder is sturdy, durable and very good at simulating grazing in a variety of ungulates. and just because I used a large spool in this design, doesn’t mean you can’t use smaller spools using the same design for smaller ungulates. 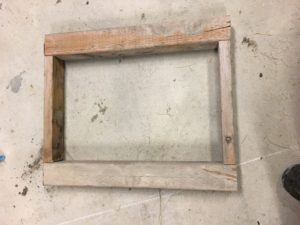 I am very excited with how well this rolling hay feeder turned out and I think it will hold up very well against the abuse it will take from a large ungulate pushing it around. The width of the spool is also very important in this case as too narrow a spool will get knocked over quite easily. Also be sure to lock the barrel bolt in place with a lock as it will secure the trap door in place while being rolled around. Have fun with the rolling hay feeder and be sure to check it periodically for breaks or any holes in the wire.

Heres a bonus video of the enrichment device in use!!